Spring is the season of a thousand festivals. Get ready to be dazzled as we visit six of the most scenic places in Vietnam. 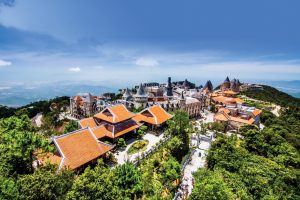 You need not go all the way to the Netherlands just to enjoy a true taste of the spring season. A visit to Ba Na Hills in Da Nang will guarantee a romantic trip, specially when you discover their famous flower garden – Le Jardin d’Amour. The Le Jardin d’ Amour flower garden was inspired by French architecture. It blends the natural landscapes together with the climate of Ba Na Hills. A total of 9 gardens comprises Le Jardin d’Amour, each one represents a unique and interesting story expressed through its architectural style. Together, they create a visual poetry that transforms this vivid space into a floral dreamland. 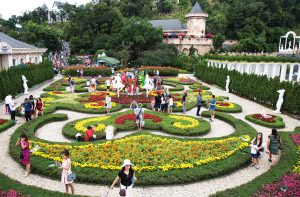 Memory Garden
“Memory” is signified by the water flow accompanied with 4 genies that represents the four poetic seasons.

Love Garden
By far the most attractive and famous of all 9 gardens, filled with various beautiful and colorful fresh flowers.

Heaven Garden
Located where the sky meets the land. This is garden is lively with bright colorful flower segments with illustrations of bell peach blossoms.

Secret Garden
A garden labyrinth which has the largest area of tree wall in the world. 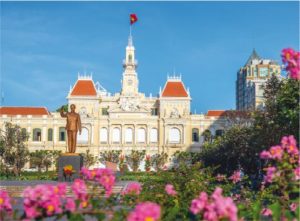 From a distance, it may look like a simple monument with 3 main buildings, but its beauty slowly unravels as you get closer. The middle building is the tallest among the three, thus creating symmetry among the adjacent structures. Look closely and you will also notice that there are 3 statues that were embossed on the building. At the center is a woman and children who were taming the furious animals. On the wings of the building, there were 2 women with swords that symbolizes the readiness to fight. Adding more intricate details to its majestic ancient beauty are the delicate bass-relief on the walls which is one of the most popular feature of French colonial style.

Facing the building is a small yard with plenty of trees, flowers. Its centerpiece is a massive statue named Uncle Ho and children created by artist Nguyen Minh Chau. The statue represents the love, respect and adoration of the Vietnamese people to one of their greatest leader Ho Chi Minh. It also depicts the common love that the locals have for their children. At night, the whole structure is spectacularly illuminated and glows like a castle from a dream. 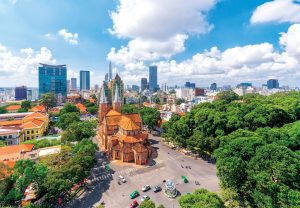 03 Notre Dame Cathedral
Ho Chi Minh City, Vietnam
Saigon’s Notre Dame Cathedral was built in the late 1880s by French colonists and is one of the very few remaining bastions of Catholicism in the largely Buddhist population of Vietnam. Located in Paris Square, its name Notre Dame was given after building the statue of ‘Peaceful Notre Dame’ in 1959. And in 1962, the Vatican conferred the Notre Dame Cathedral’s status as a basilica and officially gave it the name Saigon Notre-Dame Cathedral Basilica. Standing almost 60 metres in high, the cathedral’s noticeable Neo-Romanesque highlights include the all-red brick façade that was even  imported directly from Marseille, stained glass windows, two bell towers housing six bronze bells that still echoes to this day, and a tranquil garden setting right in the middle of busy downtown Ho Chi Minh City District.

A statue of the Virgin Mary also stands in front of Saigon Notre Dame Cathedral. Locals claim to have seen tears being shed back in October 2005. It was later refuted by the Catholic Church of Vietnam, yet it didn’t stop thousands of visitors, tourists and pilgrims from flocking in to pay tribute to the statue in hopes of witnessing a miracle. Apart from its well-known status as one of Ho Chi Minh City’s most famous attractions, Saigon Notre Dame Cathedral also serves as a religious institution for the local population. If you’re planning to visit the area, the best time to go is during a Sunday mass at 9:30. As with any other sacred places around the world, appropriate dress code is a must.

REDEFINING HOSPITALITY
Pullman, Accor’s upscale brand, has made its debut in Ho Chi Minh City with the addition of Pullman Saigon Centre in the heart of the city. The first Pullman property in Ho Chi Minh City and the third in Vietnam, this lifestyle hotel is located in District 1, near the bustling Ben Thanh market, Saigon’s most famous local market.

Pullman Saigon Centre has 306 spacious guestrooms, including 17 opulently-appointed suites – all of which offer guests an intimate space ideal for resting, relaxing and working. The rooms vary in size from 34 to 160 m2 and are outfitted with urban contemporary décor. The stylish furniture and amenities provide comfort and functionality for all types of travelers, featuring Pullman signature beds, separate rain showers, cutting-edge designed bathtubs, complimentary high-speed Wi-Fi internet, coffee/tea making facilities, a 40-inch flat LED screen IPTV with international channels, and multi-function panels that can integrate the room’s entertainment system with each guests’ own devices. The highlight of the rooms is the floor-to-ceiling windows that offer spectacular views of the city’s skyline. 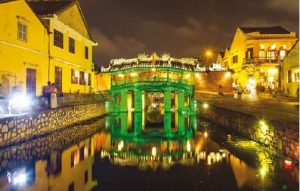 04 The Old Japanese Bridge Hoi An, Vietnam
The graceful symmetry of this aging historical bridge is nothing short of a pure cultural experience. The old Japanese Bridge in Hoi An gracefully combines form, function and historical significance. Some locals see it as a symbol of peace just by crossing or hanging around this Zen-inspired bridge. Even Monet felt moved to create a masterpiece based upon this legendary Japanese bridge. Without a doubt, it is the most famous Japanese bridge in all of Vietnam – if not all the whole of Southeast Asia. Constructed sometime in the early 1600s, the old Japanese Bridge has since continued to be a symbol of the town and a beautiful reminder of the rich cultural heritage of this town.

A Japanese bridge in the middle of a Chinese-influenced town is by no means an accident. Thanks to its close proximity to the South China Sea, Hoi An was one of the most important trading ports for the Chinese, Dutch, Indian, and Japanese merchants up until the 17th century – the Japanese traders being the more dominant force at the time.

Today, the Hoi An Old Town is now a UNESCO World Heritage Site, which draws thousands of tourists all wanting to go back in time for a brief visit. The Hoi An Old Japanese Bridge remains a symbol of the impact that the Japanese had in the region. It was originally constructed to connect the Japanese community with the adjacent Chinese quarters which was separated by a small stream of water. This attempt to bridge the two sides is seen as a symbolic gesture of peace. 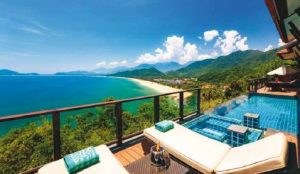 AN EXPERIENCE LIKE NO OTHER Be a part of the first and largest world-class integrated resort in Vietnam – Laguna Lăng Cô, Banyan Tree Lăng Cô. Considered by many as one of the most amazing destinations for those who want to hide away from the bustle of city, Banyan Tree Lăng Cô is a leading international operator and developer of premium resorts, hotels, residences and spas, with a collection of award-winning brands.

Designed to bring you the feeling of closeness to nature, privacy and romance, Banyan Tree Lăng Cô is nestled within a unique crescent bay in the Chan May Economic Zone, framed by a three-kilometer beach overlooking the sea. Famous for its magnificent pristine beach, lush tropical jungle, the marvelous Truong Son Mountain Range and especially, Banyan Tree Lăng Cô’s proximity to the UNESCO World Heritage Sites including Complex of Hue Monuments, Hoi An Ancient Town and My Son Sanctuary certainly makes it more convenient for guests.

Inspired by the artistic heritage of past Vietnamese dynasties, the main buildings and 62 villas of Banyan Tree Lăng Cô features integrated clay tiled pitched roofs, open courtyards and wood rafter ceilings designed in the style of the traditional houses of Hue that truly reflect the cultural and historical legacy of Vietnam. Apart from the traditional beauty, Banyan Tree Lăng Cô also features modernity and convenience in all-pool villas, world-class restaurants like Saffron – a Thai signature restaurant, the award-winning Banyan Tree Spa and modern gym. And for those who love outdoor activities, the Banyan Tree Lăng Cô also has a Recreation Center with more than 100 exciting water activities and an 18-hole championship golf course designed by the Golf Legend – Sir Nick Faldo.

The Banyan Tree brand also delivers to guests a quintessential relaxation with the experience of integrating with luxury service in the romantic and natural living. The spirit of Banyan Tree brand is based on the rejuvenation of mind, body and soul in awe-inspiring locations around the globe. Truly, it can be said that Banyan Tree is the “Sanctuary for the senses”. 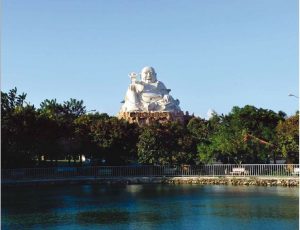 05 Trail of Big Buddhas Vung Tau, Vietnam
The best place to start your Buddhist pilgrimage is in Vung Tau in the Phuoc Hai Monastery. Although it’s not as intimidating as the other magestic pagodas, the monastery offers free vegetarian meals – of which the bun rieu is a heavy favorite among locals and visitors. Instead of being made with the usual dried shrimp and ground crabs, this vegan-inspired noodle soup includes tofu, pineapple, and mushroom served with fresh vegetables and bean sprouts. As simple as it may sound, the dish is so famously delicious that it has earned the nickname for its monastery as the “bun rieu pagoda.” You may visit the pagoda in the morning and have this famous dish for breakfast.

Several kilometers down the same road, you’ll find the Dai Tong Lam Pagoda. Built in 1958, this 100-hectare complex consists of a series of pagodas, temples, and a Buddhist school. It has earned many world records for Vietnam such as the biggest collection of Buddha statues – more than 10,000 as of 2007, and the largest central chamber.

And lastly, visit the Thich Ca Phat Dai, a pagoda that covers some six hectares on Nui Lon (Big Mountain). The mountain is located on Tran Phu Street, which is some three kilometers from the town’s center. Known for its giantic trail of Buddha statues, some Buddhas are as wide as 12 meters at their base and stretches 11 meters high. 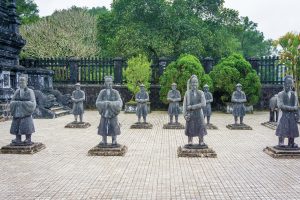 Emperor Khai Dinh has chosen the location of his imperial tomb at the foot of Mt Chau Chu, which is 9 kilometres south of the city of Hue. In comparison with other imperial tombs, the Imperial tomb of Khai Dinh is relatively small in terms of extent, with a little more than 5,600 square meters. However, its intricate construction, decoration and elaborate details surely makes up for its lack of size.

The structure of this Imperial tomb follows a rectangular shape which measures 117 meters long by 48.5 meters wide. The majority of the Tomb is largely constructed using reinforced concrete has more Western influences compared to other imperial tombs in the country.

It has 2 contrasting parts. The first part is the Palace Thien Dinh, where we the sarcophagus of Emperor Khai Dinh can be found. The second part is the outside of the Imperial Tomb, where numerous statues are featured in the courtyard of ceremonies along with the House of Mandarins and the Pavilion of Steles with its famous hexagonal-shaped structure.

Upon crossing the gateway to the Imperial Tomb, you will find 37 steps whose railings have been amazingly carved in the shape of dragons – the largest in of all Vietnam. Once you have ascended the steps, a small courtyard will greet you along with the House of Mandarins on both sides. To access the adjacent part of the Imperial Tomb of Khai Dinh, you need to climb another 29 steps, after which you are then rewarded with the sight of numerous stone statues at the courtyard of ceremonies. Unlike other imperial tombs in Hue, Imperial Tomb of Khai Dinh has 2 rows of statues – the second row being the bodyguards of the emperor.

Let your kid be transformed into a Little Bartender, Little Gardener or Little Chef and be greeted by Snow White, Cinderella or Superman every…