Start 2018 with a big adventure. And what better place to do it than Cambodia’s Siem Reap – an explorer’s paradise. 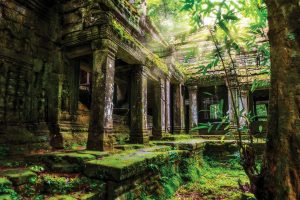 Traveling to exotic places is always among one of the wishlist of many travellers, both young and old. But when you talk about “Exotic” one place stands out above the rest – Siem Reap! Definitely the destination of choice for those looking for both real adventure and unparalleled beauty. 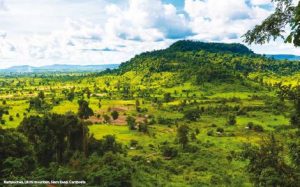 Located in the northwestern region of Cambodia, this magnificent city has long been a popular tourist destination for decades and is known for many things like its vast and rich historical and religious sites, French cultural influences and multi-faceted local culture. Travellers are invited to explore Siem Reap’s temples and bring home with them a piece of its history in the form of handcrafted jewelry and décor. Knowing exactly where and when to go makes a huge difference when visiting a place like Siem Reap. Use several Siem Reap travel guide for navigating your way through this fantastic Southeast Asian city and be sure to make the most out of what will surely be an unforgettable adventure. 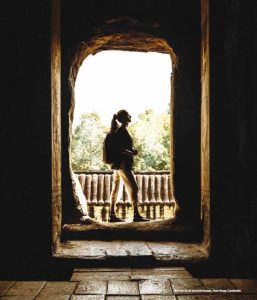 Must-Do in Siem Reap
• Explore Baphuon and Angkor Wat, two very massive Buddhist temples built back in the 11th and 12th centuries
• Spend your day at the Cambodian Cultural Village, an EPCOT-like theme park and museum that features miniature villages representing the local cultures in the region.
• Traverse Siem Reap’s freshwater lake, Tonlé Sap, and see the floating villages around this massive body of water
• Explore the ruins of Angkor Thom, the former capital of the Khmer empire, and tour the many structures of this ancient city.
• Shop and dine at the Made In Cambodia Market, where local vendors exclusively sell items only made in their country. 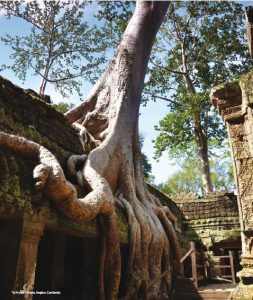 More reasons to love Siem Reap
Like most of Southeast Asian cities, Siem Reap has not been exempted from experiencing a tropical wet and dry climate and sees a long wet season almost every year. So if you’re planning to visit here but absolutely hate the rainfall, visit the city between December and March when temperatures average in the high 80s and low 90s by day and where precipitation is at its lowest. Bring plenty of sunscreen as well, regardless of what time of the year you intend to visit.
Almost a decade ago, Siem Reap was the place where you stayed, ate and grabbed a beer or two between explorations of Cambodia’s 12th-century temple complex Angkor Wat. Today, the city made popular by Angkor Wat has now become a destination itself, attracting tourists with its vibrant dining scene, posh hotels and a laid-back atmosphere. Add a growing number of local and international artists, performers and designers reviving the traditional arts and constantly exploring new means of creative expression and you’ve got an ideal vacation city, regardless of whether or not the temples are on your list.
Nature’s Sanctuary
In addition to the appeal of its cultural treasures, Cambodia attracts more and more visitors craving for uncongested, contamination-free spaces, in a country still largely defined by rural life and vast natural sanctuaries. While authorities are determined to protect the Angkor site from the most negative consequences of automotive traffic, private endeavors for green, responsible tourism are flourishing. Remarkable results have already been reached at 4Rivers Lodge on the Tatai River, the first ecological-minded floating tent resort in Asia, or at Templation Angkor, a sustainable luxury collection of suites and villas located a few minutes cycle ride from the Ancient Khmer temples. There, for instance, vegetable roofs, emphasis on natural airflow and rainwater collection are smartly combined to in-sight solar energy production to reduce drastically the carbon footprint of an hotel dedicated to serenity.

Sraa Sipping
Famously described as both an elixir and a rocket fuel, Cambodia’s favorite potent rice wine (sraa in Khmer) can only be enjoyed through an acquired taste. A line of infused rice wines that are inspired by the flavored rums of Mauritius and made in Siem Reap by two French expatriates. At the Sombai shop, you have the luxury of touring the petite infusion room filled with glass jars of sraa floating with exotic ingredients like star anise, coffee beans from the Ratanakiri province, ginger and coconut and pineapple. The wine is infused up to eight weeks before being packed to hand-painted bottles. You can also settle in for a tasting for flavors like green tea-orange or lemongrass. Sample tipples made with the wines, the Sombai Sour, with chili sraa and lime juice definitely packs a tart and zesty kick, all while you chow down some local chips and other drinking beverages.
Exotic Dining
Forget about fancy restaurants. The well-known Cuisine Wat Damnak promises to serve you dishes that are both exotic and delicious. These culinary masterpieces are from the longtime resident French chef Joannès Rivière’s kitchen. Their food is firmly rooted in rich Cambodian flavors. Making use of seasonal ingredients that are available from local vendors at Siem Reap’s very own Old Market, Mr. Rivière creates two tasting menus ($24 and $28 for five to six courses) every week. Recently, Cambodia’s iconic sour fish soup appeared in the form of a tart curry with freshwater fish and banana trunk, and wild mushrooms taken from nearby forests that surround the temples complemented by frog meat in an Angkor Stout reduction. How much more exotic can you get? 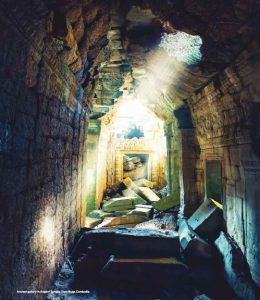 Shopping Spree
Siem Reap’s creative vibe is made more evident in the city’s growing number of stylish boutiques. Start your way at Pop-Up Shop, where the Australian owner’s passion for Scandinavian design comes alive through various unique local souvenirs like watermelon-half pillows and block-print notecards. Stroll further three blocks down to Kandal Village and you’ll arrive at a cluster of shops, cafes, restaurants and spas that have transformed two rows of bland storefronts into one of Siem Reap’s coolest street. Silk scarves with trendy ikat designs, boldly colored diamond-quilted cotton blankets and delicate silver spoons and miniatures, plus one-off pieces like 19th-century weaving patterns from France, all are on display at Louise Loubatieres. A few doors down is the funkier Trunkh, loaded with treasures that are both produced and found in Cambodia. Boldly patterned cotton shirts and pants, exotic animal figurines, dragonfly-designed sarongs, aged hand-painted shop signs, and carousel animals. The famous Cambodian designer Sirivan Chak Dumas’s boutique of the same name displays smart and well-priced women’s wear in both bright and neutral-toned linen, silk and featherweight cotton. If tailor-made is more to your taste, head over to Neary Khmer, where you can choose from vibrant raw silks and have some made to order. 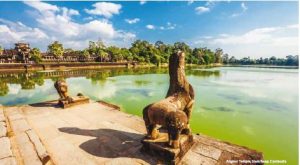 Feast for a Cause
Ride a tuk-tuk for just $2 for a short ride to Marum, a hospitality training restaurant for Cambodian youths run by Friends-International, with similar restaurants in Phnom Penh and Laos. Occupying a lovely mansion whose tables cut across to a large garden shaded by trees strung with fairy-lights, Marum’s selection of menu tends to tapas-style fare both authentically with crisp and creamy silkworms served with spicy green mango salad for just $4.50. Try also the Cambodian rice paper rolls with grilled peppers, goat’s cheese and tamarind chile dip for just $4. The main-course-size stir-fried beef in a silky sauce soured with red tree ants, over crunchy water spinach leaves will definitely surprise you, but in a good way. Save some room for the thick, spicy chocolate and Kampot pepper cake with passion fruit syrup. 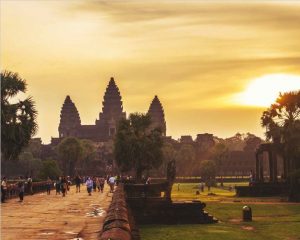 Tranquil Temples
The best way to avoid the tourist crowds at Angkor Wat is to beat the sunrise and straight away venture beyond the main temples. Situated atop a hill of the same name some 90 minutes by tuk-tuk or about an hour by taxi from Siem Reap, Phnom Bok Temple can be reached by climbing up a 635-wide steps. This will cost you $20 for a day pass and are sold as early as 5 a.m. at the entrance to Angkor Archaeological Park. Your extra efforts will soon be rewarded when you enjoy the silence coupled with the sweeping views over Tonle Sap Lake, the Kulen Plateau and vast rice fields. Built between the 9th and 10th centuries, the temple itself is unrestored but still remains picturesque, as the frangipani trees sprouting from its three towers give it its unique look. Enjoy a picnic in the middle of this exotic wonderland as most hotels will pack a simple breakfast box for you while you enjoy the solitude for about an hour or so before descending to join the many late-risers at the more popular temples closer to Siem Reap. Expect stops at the diminutive Banteay Samre and Banteay Srei, whose intricately carved red sandstone temples draw visitors from all over the world.

Smart Lodging
With over two million visitors each year, Siem Reap boasts a wide range of hotels that matches any budget. Choose from the city’s most luxurious, and private, boutique lodgings or experience the traditional teak houses in a walled garden. The choice of accommodation is as vast as the temples in the city.

Less pricey boutique amenities are also available in a tranquil setting about halfway between Siem Reap town and Angkor Wat, where you can share a swimming pool set in tropical gardens, along with an on-site spa. These are just some of the wonderful offerings that you can expect from the lodging around this vibrant and manificent city.

When it comes to variety, Thailand never fails to deliver. No matter what your taste is, this Southeast Asian jewel can compete with even…