Movie and TV Filming Locations to Inspire Your Next Holiday by: Khristy Choo

With the growing trend of screen tourism, several prominent filming sites have seen a massive spike in interest and number of visitors, with enthusiastic television and movie fans eagerly scouting out exact locations to retrace the footsteps of their favourite characters. Here are a few destinations for your next holiday inspiration, and in the words of Ryan Seacrest, “Dim the lights, here we go.” 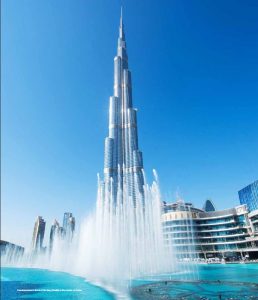 DUBAI, UAE
Truly a city of contrasts, Dubai is a spellbinding combination of magnificent skyscrapers, cosmopolitan city life, and the vast and spectacular sandy desert. Home to the tallest structure in the world, the Burj Khalifa skyscraper towers over all other structures at a whopping 829.8 metres. We get an idea of just how tall this building is in the nail-biting sequence in the movie Mission Impossible: Ghost Protocol, where Tom Cruise’s character Ethan Hunt makes the seemingly impossible happen by scaling the building, resulting in the rest of the city below looking miniscule in comparison, and keeping the audience’s attention locked on the screen. 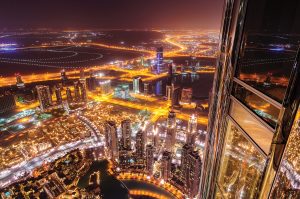 Speaking of the city, its evolution of design and architectural development to now become of one the world’s most innovative and booming business and tourist hubs is nothing short of impressive. So much so, that it served as the backdrop and inspiration for the futuristic starbase Yorktown in Star Trek Beyond. On your next Dubai getaway, be sure to visit some of the shooting locations, which include the Meydan Racetrack, Sheikh Zayed Road and Downtown Dubai.

For a truly unique and spectacular holiday, the Burj Al Arab is known as one of the best and most luxurious hotels in the world, with previous guests including Lewis Hamilton, Selena Gomez, and Roger Federer. You’ll be well taken care of from the moment you touch down at the airport, with options to arrive at the hotel in style in a chauffeured Rolls Royce or by helicopter pick up, making a dramatic landing on the hotel’s private helipad. The two-bedroom Presidential Suite is the epitome of luxury, with panoramic views of the azure ocean, a jacuzzi, two floors with floor-to-ceiling windows, a spacious private dining area, and a brigade of butlers available at your service, among many other services and amenities. Priced at over US$8,000 per night (www.jumeirah.com/en/hotels-resorts/dubai/burj-al-arab/). 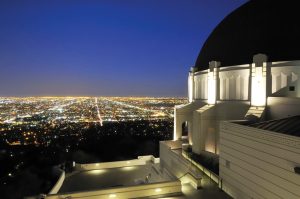 LOS ANGELES, USA
Over the years, many iconic movies and television shows have showcased the beauty and unique charm of Los Angeles, with it propelled into the spotlight once again with the Academy Award Winning film La La Land. Movie goers fell in love with Ryan Gosling and Emma Stone’s portrayal of a couple navigating the ups and downs of show business in the “City of Angels.” Fans can follow their footsteps and visit many of the filming locations, such as Griffith Park, where the duo bask in the view of the San Fernando Valley night lights, and Griffith Observatory, where they tour the planetarium and perform a memorable dance number (http://griffithobservatory.org/), and grab a bite to eat at Sarita’s at the Grand Central Market. With jazz music playing a significant influence in the movie, be sure to stop by the Lighthouse Cafe in Hermosa Beach, which has a history of showcasing jazz musicians since the 1940s, and opened their doors to the filming crew back in 2015 (www.thelighthousecafe.net/). Balance your visit to Los Angeles by spending some time out on the water, and cruise the coast in a private luxury super yacht. The 145’ Sun Coast is perfect for a private gathering, or low-key romantic dinner cruise getaway under a blanket of glittering stars. Available for half day or overnight charters, this yacht features two main salons, four staterooms, multiple indoor and outdoor dining areas, full chef’s galley, a helipad, and a gym, among others, with private chefs available to prepare a fully customisable menu onboard, and the added service of bartenders if you choose. Guests who are keen on getting out in the water also have the option of renting jet skis or kayaks, a great way to bask in the Californian sunshine. For over US$15,000 for up to 12 guests, this excursion is the perfect way to sit back and relax (https://luxuryliners.com/). 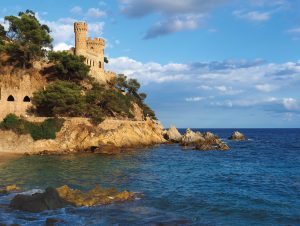 SPAIN
Even if you have never watched an episode of Game of Thrones, the chatter and hype surrounding the Emmy Award winning television show is inescapable. From the repetition of phrases such as “You know nothing,” and “Winter is coming,” to the hours spent by avid fans coming up with theories and predictions for upcoming episodes, this series has become a television and cultural phenomenon, and the combination of a stellar cast, riveting storylines, and enchanting settings keep viewers waiting impatiently for the next season to premiere. 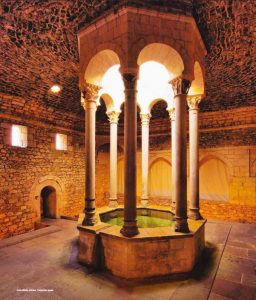 Centered around the power struggle among the great Houses of Westeros for the Iron Throne, many filming locations have played starring roles over the years, such as Northern Ireland, Iceland, Croatia and Malta, with the latest seasons shining the limelight on Spain’s incredible landscape. For instance, the Castillo de Zafra, in the northeastern corner of the province of Guadalajara, dates back to the beginning of the 13th century, and has its own interesting history of royalty, rebellion and sieges, making it the ideal setting of the “Tower of Joy,” and well worth the trip out to see the structure in person. 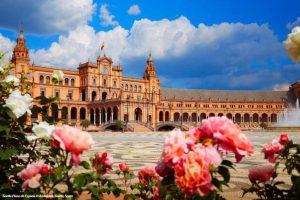 The city of Girona, with its distinct medieval architecture, takes center stage as Braavos, Oldtown, and Kings Landing. Wander along the same path as Arya at Bisbe Cartaña, where she was chased and later commences her fight training, and marvel at the magnificent structure of the Girona Cathedral, where you can walk up the same cathedral steps as Jaime Lannister did on horseback.

Lonely Planet’s list of top 10 cities to visit in 2018 saw Seville crowned as the victor. A city known for its history, laid-back lifestyle, Gothic architecture, bustling culinary scene, artistic vibes and vibrant culture, Seville’s clash of modern day life and a strong sense of tradition make it an increasingly popular travel destination, and Game of Thrones fans will also be quick to recognise parts of the city in the show.

The courtyards of the Alcázar of Seville served as the filming location of the Water Gardens, and perfectly brought to life the warm, lush and luxurious residence of the rulers of Dorne, as first depicted by George R.R. Martin in the novels. In real life, this royal palace is a registered UNESCO World Heritage Site, and its intricate details, beautiful rooms, and well-kept gardens are a must-see for fans of the books and television show (www.alcazarsevilla.org/).

The Hotel Alfonso XIII is perhaps the most stunning hotel in Seville, and, like the rest of the city, is a place with interesting history, superb craftsmanship and beautiful design elements. Designed for a Spanish king in the 1920s, it boasts an impressive list of former guests, including Sophia Loren, Audrey Hepburn, and Brad Pitt. Attention to detail is a central component here, with marble columns, Arabic-style arches, and antique furnishings bringing life and character to the rooms. From US$3,800 per night for up to six people, the Royal Suite is the perfect place to unwind at the end of a day of site tours (www.hotel-alfonsoxiii-seville.com/).