All year round, there isn’t a bad time to visit Singapore – Asia’s melting pot. With its almost humid weather all year long, there’s very less rain in Singapore during the fall season compared to other parts of its neighbouring countries, but definitely a lot of heat, which you can easily beat with a quick visit to Sentosa beach.

Unlike any city in the world, Singapore is a perfect harmony of different cultures, a juxtaposition of new and old architecture standing almost side by side as if to represent both the past and the present. The Lion city offers a whole spectrum of dining options ranging from deliciously affordable street food to pricey, Michelin-starred haste cuisine – perfect for the hungry traveller. Discover for yourself what life is like in one of the world’s most affluent cities with meals ranging from S$500 a pop all the way to the S$5 chicken rice street food scene.

Singapore is, without a doubt, the most developed and urbanised country in Asia, if not in the entire world. This vibe quickly becomes apparent as you discover the culture of this unique country-city by exploring both its famous landmarks and the lesser known streets that bear the local scene. Though small in size, Singapore has always punched above its weight. There are plenty of major attractions to see, grounds to explore and under-the-radar areas to discover.

For the autumn season, Singapore’s Gardens by the Bay is perfect for smelling the roses. A wide array of flowers and plant life is perfect for your next Instagram vacation post. If you’re looking for some extreme adrenaline-pumping activity, then brace yourself for the tallest dual roller-coasters at Universal Studios Singapore.

But beyond its futuristic backdrop, the rich history of Singapore and its people can only be enjoyed by experiencing the local scene as you explore its streets by foot. Make sure to visit the museums or have your morning breakfast with orangutans at the Singapore Zoo. And if you’re not sure where to start, you can always go “traditional tourist mode” by simply visiting its most iconic landmarks like the Merlion, The Singapore Flyer and the Marina Bay Sands infinity pool. 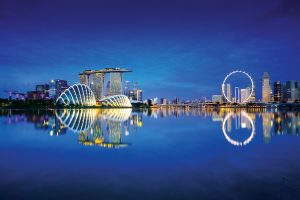 Yangon is Myanmar’s crowning glory. A city overflowing with endless excitement and untold surprises at every turn. Now known for its astonishing pace, it has only been a few years since it departed from the controversial days of military rule that this exotic nation was thrown into the limelight. Now, several blessings later, tourist numbers are soaring and Yangon is one of the driving force behind this unprecedented growth.

Also known by its colonial name of Rangoon, Yangon is fast becoming South-east Asia’s latest boom town. Glass-made skyscrapers are fast rising one after the other, almost seemingly battling for a place within the city skyline and glittering golden pagodas. And with the curtain of mystery suddenly lifted, Myanmar’s edgy excitement is now ready to be explored by the world. And since the colours of autumn ironically blends well with its many temples, Yangon is a perfect place to visit if you’re planning an autumn adventure this 2019. 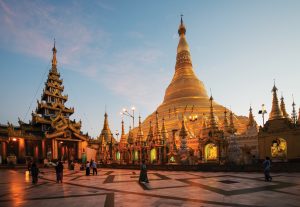 The Shwedagon Pagoda is, without a doubt, the nation’s show stopper, with many locals calling it as their very own Taj Mahal. The golden stupa soars 100 metres into the horizon carrying with it a staggering 30 tons of pure gold leaf, almost 2,500 rubies and a 76-carat diamond nestled on its crown. Nobody knows for certain how old it is, but it may seem to have risen by several degrees from about 600BC, with new layers and chambers added over the centuries to house sacred relics.

Nowhere is Buddhism more prevalent as a living, breathing religion than in Yangon. Tourists are vastly outnumbered by Burmese amidst a sea of red-clad monks and pilgrims that surround this holiest of monuments, pausing at marble pavilions and shrines where they leave offerings of rice and flowers. A true sight to behold if you’re planning your next fall adventure.

Imagine a city in the distant future where robot entertainers thrill curious diners, mind-blowing avante-garde architectures and a dizzying pace of urban scenes – yes, it can only be Tokyo!

All year round, Tokyo will never run out of ammunition in the ever-growing tourism war. Take the Robot Restaurant for example – dinosaurs, laser lights, techno sounds and robots – lots and lots of robots! Arguably one of the top tourist attractions in Tokyo, the Robot Restaurant is located in the Shinjuku nightlife district. It’s considered by many as one of the wildest and unexpected shows on the planet. The first performance venue opened in July of 2012 and has quickly garnered an international reputation for pushing the boundaries of entertainment to its absolute breaking point. Blaring pop music fills the dark room as shiny warrior princesses slowly come out to fight huge robots as the ricochet of laser beams bounce at every corner. 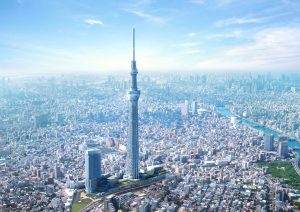 Another hard-to-miss attraction is the Tokyo Skytree, and for a good reason since it is the tallest structure in the country built like a fusion between a pagoda and a transmission tower. Currently at 634m, It’s the second-highest in the world, falling short of the 829m Burj Khalifa tower in Dubai. It was built using the same principle as pagodas; relying on a central pole to keep everything steady and stable. Be warned though, the number of tourists wanting to climb within the structure never ends. But once you reach the central chambers, you’ll be rewarded with an unmatched view of the Tokyo skyline. 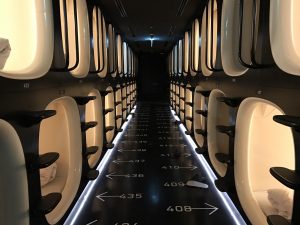 From dizzying heights to tight spaces, another unique experience that you must try when in Tokyo are the Capsule Hotels. Unlike any other accommodation, these hotels consist of individual pods, sometimes dozens cramped in a single room, where each capsule is a self-contained mini-hotel room on its own, complete with a bed, lights, and sometimes even a TV. You can find capsule hotels all over Tokyo. They come in various styles, some from plastic tubs similar to what you see in a sci-fi movie all the way to comfortable sleeping mini-rooms with a window and a view. Each capsule is roughly as wide and as long as a single bed – definitely not for the claustrophobic. Inside generally are shelves and outlets for your electronics and often a small locker and even a radio.

Known for its emerald paddies and pristine white sand beaches, Bali lures tourists from all over the world searching for the perfect mix of adventure and serenity. Apart from its famous beaches and roaring beach side nightlife, Bali is also synonymous with great food with most restaurants having a surplus of seats. 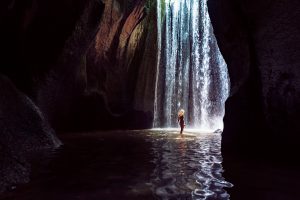 But if you want to venture on the path less travelled, Tukad Cepung Waterfall might just be the attraction you’re looking for. Tukad Cepung Waterfall still remains as the best virgin waterfall of Bali. Not known to a lot of people, this natural wonder has managed to stay under the commercial tourist radar for many years. The area is maintained by the local villagers and some of them go as far as to explain the history of the waterfall to the visitors.

Sunshine reigns over Taipei during the generous golden autumn season. Taipei has always been an underrated city for exotic autumn explorations. It’s a tough little city whose beauty lies in its unique blend of Chinese culture with a curious touch of Japanese, Southeast Asian and American influences. And this oddness is one of its charms.

Inspired by the kawaii (cute) culture of Japan, Taipei is a city with a lot of home-grown humour. It is a place where chocolate sauce on a steak is accepted and where themed restaurants transport you to a world where you eat hotpot from a toilet bowl or in a hospital ward for dinner. With its streets of blackened walk-ups and countless shops, one can easily make the mistake of assuming that the city looks like it was hurriedly put together.

Upon closer observation however, great care has been taken to make it a truly liveable place for its locals. A visit to Chiang Kai-shek Memorial Hall is a must for any tourist who want to have a deep understanding of the culture and colourful history of Taiwan. A closer inspection at this solemn Chinese-style architecture will slowly reveal exquisite design that conveys the spirit of Chinese culture. The exhibition hall on the ground floor tells you about Chiang Kai-Shek’s life. As you go higher, you’ll be greeted by galleries and exhibition rooms on the 2nd and 3rd floor. You definitely must not miss the must-see attraction located on the 4th floor – the honour guard shift-changing performance. The show starts every hour of everyday from nine o’clock in the morning to five o’clock in the afternoon.

The Malaysian island of Langkawi is a vast and stunning forest arrayed getaway that’s located at the very bottom of the Andaman Sea on the west coast of Peninsular Malaysia. The island is roughly the size of Singapore and is surrounded by beautiful beaches and colossal limestone karsts. This natural beauty is the inspiration behind their official 2012 tourism slogan, “Naturally Langkawi”.

The island’s rugged northern area is home to forest peaks and majestic mangroves, along with a host of lesser-known beaches. For the more adventurous that are willing to use their own transport, the island’s network of smooth, sealed roads offers an ideal scope for explorations and day trips. Courtesy of its international airport, it attracts a diverse crowd of Western, Asian and Middle Eastern tourists. This has translated into an abundance of eating options across many different cuisines that populate the restaurants in the island.

Pantai Cenang, or Central Beach, on the southwest side of the island, is the most famous and is also where many visitors end up going. Resorts, bars, restaurants, and tourist attractions line the short beach. Just to the south, resort-lined Pantai Tengah is an expensive-yet-quieter alternative to the busy Central Beach.

However, despite all the splendid choices of serene spots that the island offers, no traveller will visit the island without paying tribute to its two most iconic attractions – the Langkawi Cable Car and Sky Bridge! Stretching more than 2 kilometres and rising to the top of the island’s second highest peak, the Langkawi Cable Car, a.k.a. Sky Cab, offers a ride over the dense rain forest and provides spectators with an unforgettable view of the surrounding landscape. It’s a wonderful alternative for those who want to deviate away from the island’s beach attractions and opt for a more adventurous route. 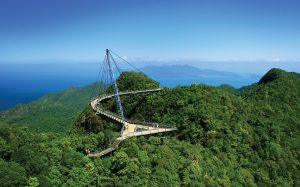 Getting to the Langkawi Cable Car and Sky Bridge is quite straightforward. It takes approximately 20 to 30 minutes to cover the 18 kilometre stretch from Pantai Cenang. The fastest route follows Route 118 past Langkawi Airport before turning left towards Pantai Kok on Route 114. Those with their own transport can take advantage of exploring the Telaga Harbour, enjoying the view of the marina and lighthouse while having a drink at the local cafes.

Heading to Hong Kong? We present to you our picks of the most luxurious four and five-star hotels to stay in, all well below…