A compelling mix of golden pagodas, colonial architecture and history-stained streets. Step into another world and get a glimpse of a city that seems to be trapped in time – Welcome to Yangon!

As we usher the coming new year, many travellers yearn for the perfect exotic getaway. Look no further than Yangon – Myanmar’s modern marvel that’s a perfect mixture of beauty, urban chaos and an undying street culture that’s deeply rooted in it’s rich heritage. As the country’s major city, Yangon (formerly Rangoon), is fast becoming Southeast Asia’s next hiptown. With diplomatic missions, business delegations and throngs of tourists filling up its hotels, Myanmar has come a long way since the country’s military government began it’s power transfer to civilian leaders in 2011. Their active role in the international community continues to this day. For now, though, as the blueprint towards many of its laws and reforms are still being drawn, Yangon still remains as some sort of an urban time warp, awaiting capital infusion that would eventually trigger a renaissance. Golden pagodas, colonial buildings, exotic shop houses and unique jazz-age mansions form a brightly woven fabric that’s unique to Asia, stitched together by tree-lined avenues swarming with buses and cars. Ethnic and religious tensions still simmer along Myanmar’s borderlands, but Yangon is far from these areas. Indeed, it’s only a matter of time when the city finally reclaims its former status as a cosmopolitan capital.

TO WHERE THE RIVER FLOWS

On Yangon’s frenzied riverfront boulevard, Strand Road, stately buildings such as the Custom House, the Central Post Office and the British Embassy bear witness to the city’s turn-of-the-century status as one of the British Empire’s key commercial and trading hubs. A beacon of tranquillity, the Strand Hotel, among Yangon’s best-preserved colonial-era mansions, has cosseted travellers almost non-stop since the Armenian Sarkies Brothers, which were the owners of the Raffles Hotel in Singapore, opened it during 1901.

It’s also home to River Gallery I, launched by a Kiwi expat named Gill Pattison, back in 2005 and is also the ideal place if you want to explore Yangon’s lively and buzzing contemporary art scene. These past few years, Ms. Pattison expanded her passion for art, with River Gallery II, which is located just up the street within a lofty-ceilinged former law office.

A TASTE OF COLONIAL HOSPITALITY

Yangon has always had the reputation of being culturally sophisticated. With numerous pagodas at every turn, the city also exudes a vibrant cosmopolitan life that’s typical of an Asian metropolis. As you wander the timeless streets of the city, make sure to book a stay at the Savoy Hotel – a colonial botique hotel ideally located in a picturesque area of Yangon overlooking the spectacular Shwedagon Pagoda – Myanmar’s “Twinkling Wonder”. It consists of 30 deluxe guest rooms including six suites. Wherever you go you will catch glimpses of times past, real or imagined, but it is the hospitality and friendliness of the people of the “golden land” which is most striking – their warmth for different religions and cultures, respect for each other and heartfelt smiles. The design of the rooms expresses the charm of “the old days”, decorated with teak furniture that evokes traditional Myanmar culture and luxurious bathrooms.

Soak up the relaxed atmosphere at their poolside whilst enjoying refreshing cocktails. Go for their customised facials, body treatments and massages guaranteed to rejuvenate every tired traveller. Treat yourself with a manicure or pedicure, with salt scrubs and masks for extra moisture. The Savoy Hotel provides a wide range of culinary choices too. The “Kipling’s” Restaurant offers a fusion of Asian and Western cuisine where traditional recipes and secrets are combined to create mouthwatering dishes, all of this whilst enjoying a splendid view of the Shwedagon Pagoda.

The “Captain’s Bar” is the heart of the hotel and famous throughout Yangon, offering cocktails, snacks, weekly live music and live sports events on a wide screen television. “Le Bistrot” offers traditional European bistro dishes. The Savoy Hotel truly captures the unique and authentic flavours of Myanmar. Its colonial heart with the 2000 year old Sule Pagoda, the famous Scott Market, and the Chaukhtatgyi Reclining Buddha all add to an unforgettable experience that can only be found in Yangon. 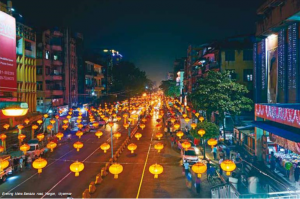 Located beside Yangon’s iconic Inya Lake, LOTTE Hotels & Resorts Yangon lets you experience the unforgettable flavours of Myanmar. Be mesmerised by breathtaking views of Myanmar’s natural treasures while you enjoy the vibrant life of the nation’s commercial capital. Newly open on the 1st of September 2017, LOTTE Hotels & Resorts Yangon sets the standard for unparalleled service and accommodation with first-class facilities that include a state-of-the-art Fitness Center, an opulent Grand Ballroom ideal for hosting picture-perfect weddings and international conferences, a Junior Ballroom, and a Business Center that provides communication and material needs for the on-the-go business traveller. 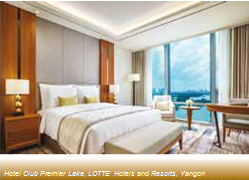 Whether its business or pleasure – rest assured that you’ll be greeted by first-rate service matched only by the towering pillars that greet you at the lobby. The spectacular views of the Inya Lake complements the wide variety of seasonal specialties, cocktails and wines accompanied by live-music entertainment. The lakeside infinity pool, pool-side bar, barbeque, Jacuzzi, spa and sauna facilities assures absolute rejuvenation for any weary traveller. Exclusive benefits packages are also available. www.lottehotel.com/yangon-hotel 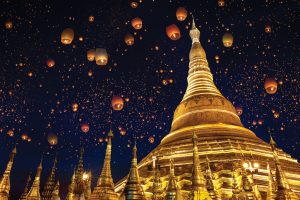 Spiritual heart of Myanmar, the Shwedagon Pagoda’s bell-shaped stupa rises in golden splendor above Yangon’s cityscape. Blaze the tourist trail by taking in the colorful pagoda neighborhood first, beginning with a bowl of mohinga noodles — Burma’s breakfast — at deli-like Myaung Mya-Daw Cho on Yay Tar Shay Old Street (about 500 kyat). Then check out the array of shops brimming with Buddhist religious items, papier-mâché toys and herbal health remedies before climbing up vertiginous steps to the Shwedagon Pagoda’s eastern entrance. By engaging a local guide in advance, you’ll both support the economy and gain valuable cultural insight. Some travel agencies, like the local operator for Kensington Tours, even donate a portion of their proceeds to local projects like the renovation of a 120-year-old Buddhist ordination hall hidden at the foot of the Shwedagon Pagoda. One of the very first shop houses to be restored for public use, Monsoon Restaurant & Bar captures an updated rattan-and-fan vibe. Grab a window table and be refreshed with iced coffee, juices or a pan-Asian lunch. CHeck out their beef Thai green curry at around 7,000 kyat; spring rolls at 5,000 kyat while the street life unfolds with gentlemen smoking cheroots, and women carrying umbrellas for shade. Upstairs, at the nonprofit, fair-trade Pomelo Boutique, expat volunteers market the work of about 20 Burmese artisan groups. Proceeds from beaded jewelry, glassware, handmade toys (3,000 to 25,000 kyat) and textiles by traditional weavers from conflict-ridden Rakhine State go to the local communities. 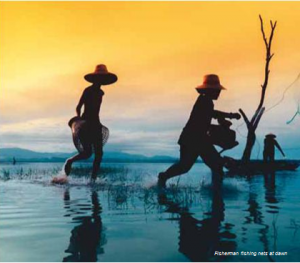 Workout your legs and walk past the Secretariat, the spectacular Victorian brick labyrinth and former colonial government headquarters where General Aung San, the father of Burmese independence, was assassinated in 1947. From there is only a few blocks to the riverfront Botataung Pagoda, where pilgrims gawk at tarnished jewel-encrusted antique icons and religious items inside the gold-gilded sanctuary — rebuilt after the World War II bombing raid that was aimed at a nearby wharf where it almost destroyed the original stupa, revealing ancient treasures buried inside. Before leaving, stroll past vendor stands selling coconut and banana offerings which are meant to appease mischievous Burmese folk spirits called nats. Down to the riverfront, watch ferries cross the tidal Yangon River waters as ships glide toward inland ports. To grasp Yangon’s rich cultural past, snag a copy of the illustrated paperback “30 Heritage Buildings of Yangon” at the Governor’s Residence hotel gift shop on Taw Win Road while having a sundowner on the poolside terrace of this 1920s-era teakwood mansion in the city’s lush Embassy Quarter. Visiting this beautiful boutique hotel is one of Yangon’s most memorable experience. 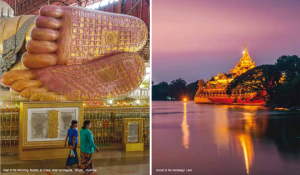 INDOCHINE AND AN UNVARNISHED CITY

The Kyaikhtiyo Pagoda, also called the Golden Rock is one of Burma’s most sacred Buddhist sites. A massive boulder on the edge of a cliff with a pagoda on top of it enshrining a hair of the Buddha is an important pilgrimage site for Burmese Buddhists.

The huge Golden Rock in the mountains North East of Yangon hanging over a steep cliff provides for an amazing sight. The rock that appears to be gold is actually a granite boulder that is covered with gold leaf applied to the rock by Buddhist devotees. The boulder is about 7½ meters high and has a golden pagoda called the Kyaikhtiyo Pagoda or Kyaik Hti Yo Pagoda on top of it where the Buddha’s hair relic is enshrined. The rock balances on the edge of a cliff and it appears like it can fall down in the valley below it at any moment. The boulder seems to hover over the ground, the contact area is very small. Around the pagoda is an atmosphere of devotion with the burning candles, the chanting of devotees, the smell of incense sticks and the offerings being made to the shrine. It is said that this place has been a Buddhist place of worship for 2,600 years. 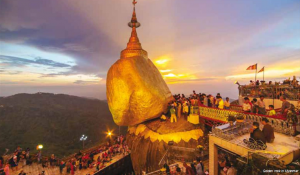 The Golden Rock with the Kyaikhtiyo Pagoda is one of the most important places of pilgrimage for Buddhists in Burma. Every day many people come to the rock and pay their respect. Devotee pilgrims apply gold leaf to the rock. Only men can do this, as women are not allowed to touch the rock. Since this is a sacred place, at the main entrance you have to take off your shoes and socks and walk barefoot to the Golden Rock. Two large lions or Chinthes guard the entrance to the temple grounds.

After dark the Golden Rock is a place with a mystical atmosphere with all the candle lights and the small of burning incense sticks. The complex consists of several viewing platforms, a number of pagodas, shrines containing Buddha images and shrines for Nats, the Burmese spirits. There are also a few restaurants and guest houses. Legend tells that when the Buddha visited the area he gave a hair relic to a hermit. The hermit went to see the King and requested him to enshrine the relic on a boulder in the shape of the hermits head.

The King who possessed magical powers, found a suitable stone on the bottom of the sea and brought it over to Kyaikto where it was placed in its current location. It is said that the Buddha’s hair, enshrined in the pagoda on top of the boulder, prevents the Golden Rock from crashing down. According to the legend the boat that was used to transport the boulder turned into stone. A large boulder close the Golden Rock somewhat resembling the shape of a boat has another stupa on top of it named the Kyaukthanban Pagoda.

The most luxurious experiences to try in Switzerland. The country, perhaps made famous by the film The Sound of Music, is home to several celebrities,…